What Will Be on YOUR Tombstone?

We often talk about "what will be written on our tombstones." Probably in a joking manner, but the subject does arise. I'm not even sure whether they're called that anymore, not whether people have saying placed on them. Anyway, the point is that we want to be known for good things, making a dent in the world, and being a good person. We want positive, uplifing things to be said about us at our funerals, right? Well, it's kind of a given as the word eulogy means "good writing" so it's "kind of the rule" that is has to be that way.

I was asked to write a letter of recommendation for someone this week. It is also "the rule" that letters like this are also to be positive and "good" but we all know that people can find a way of avoiding the issues and writing a bland letter. I am happy to say that the one I drafted was one of easiest things I've written in some time. It got me thinking, however. I know I've said many positive things about this person [to others]. If someone who knows me and and is familiar with my teaching would read the letter, they'd know exactly about whom I was writing. But have I said these fabulous things to her face? Have I complimented her? I think not; at least not often enough and not recently enough. *cue shameful music*

Don't wait until it's "too late." Make a point to encounter someone and say how you feel, telling him or her which qualities they possess that you find appealing. We encounter enough negativity, right +Tom Whitford? Let's turn that around. What about today? What about now? Why wait until someone is dead until we say good things about them? People cannot wait around to read their own tombstones or listen to their own eulogies, as then it's too late. Say it to the person's face. Leave a note on their car, right +Todd Nesloney? 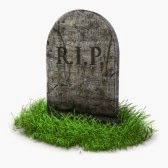 Better yet, instead of living life for what you'll be remembered for when you're gone, live life for what people get to enjoy you for today and now. Think about this: What would someone easily write on YOUR letter of recommendation?
Posted by Unknown at 7:30 PM